Welcome to another massive update to our humble VR party rumble. These past few weeks we’ve focused on implementing new multiplayer game modes.

In Bull Run, the non-VR players take controls of a bull milling up about in a grass enclosure full of other bulls. The player-controlled bulls have to make their way back to the barn without getting discovered by the Gorilla. The Gorilla has to identify (and eat) the rebel bulls before they make it home. Hide in the crowd, cause a little chaos and then bull rush your way to the exit before you get eaten!

We designed a new map (The Forest) just for this game mode, with a simple clear design. Bull Run really strips the game down to its core elements. It’s just cows, a gorilla and a lot of trees for cover. Cows can charge to clear obstacles (trees, fences, other cows) out of their way. You can also use the “motivate” action to drive a portion of the herd forward in your direction. This can be an effective way to create a bit of chaos, but also draws attention to you.

This game mode (like the rest of the game) is still in development and we would love your feedback. We think this game mode really works well in 1v1 situations and we’re working hard to improve balancing when more player-controlled cows are present. 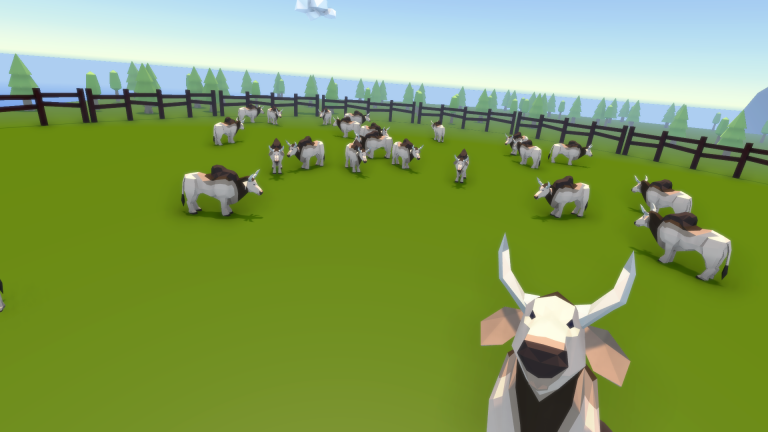 Cross the City is our second new game mode in this update, where the non-VR players have to cross the city (from bridge to tunnel) while the Gorilla tries to prevent them. It’s not as “finished” as the Bull Run, but it’s allowed us to take steps forward in building more complex, mission-driven game modes. You can find this new game mode in the Experiments tab. We want to expand this game mode to include more complex tasks and find a better way of balancing it.

Balancing our game is a constant challenge. Something that works 1v1 won’t necessarily be balanced 4v1. If we force all paths to cross then the gorilla can just stand in one spot and wait for the cars to come to them. If we have too many possible paths then the gorilla has no chance to stop the flow of cars. But we’re working on it, and as always, listening to your feedback.

This is just a small taste of the changes and improvements that have gone into this update. Just implementing Bull Run required numerous changes (new map, new controls, new game mode, animations, better AI) that touch almost every part of the game. But each update makes our core better and lets us add new features faster. A full list of changes follows below.