We’re back with another major update. We’re calling this one Future Foundations because, well, not only is it chockfull of good stuff, we’ve also laid a lot of ground work for future updates. It’s going to be a lot easier for us to add new content (new maps and new game modes) in upcoming updates. We can’t wait to share what we have in store the next few months.

Probably the biggest source of recent complaint was our tank controls. We heard you loud and clear and really focused on improving them (check out our dev diary and our Beta update for more details).

All vehicle controls have been adjusted significantly, primarily the tanks and cars now move fully with the left stick instead of the triggers (well cars can still make use of triggers too, for the tanks, they shoot). This has had a cascading effect on controls. The planes have also been slightly adjusted. And everything is smoother and more precise. We really hope you enjoy it.

Our first real bit of new content. We’ve spent a lot of time setting up a new map. It’s still not fully finished, but it’s playable and gives you a taste of what is to come. We’re still working without an artist at the moment so we are limited in what we can produce, but we invested in improving our content creation processes to understand the impact on the rest of the game. What we’ve learned (and the bugs we’ve shaken out while creating the map) will make it much easier for us to add more new content.

Check it out and please let us know what you think.

We experimented with a new game mode called Disguise Masters. This built on the Disguise power-up we quietly slipped into the last release. After extensive playtesting, we realized it’s still too similar with the Last Man Standing mode. So instead we’ve reworked the Last Man Standing to have a lot more disguises. (You can still find the new Disguise game mode in the Experiments tab, we’re just not ready to promote to a full-fledged game mode) 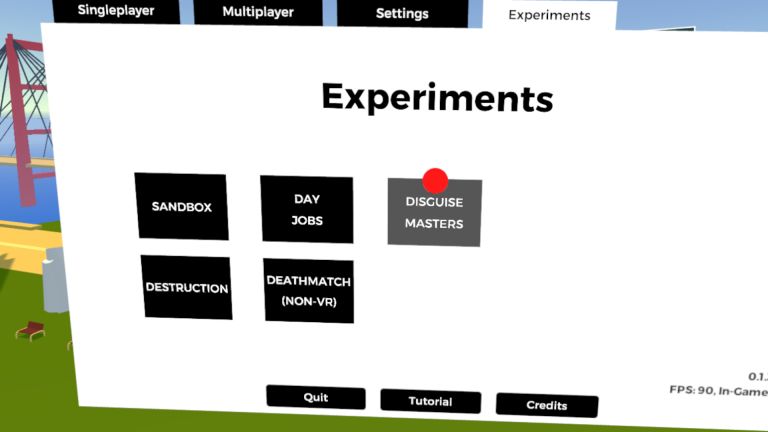 Like the new map, this is our first new game mode since launch and it’s given us an opportunity to clean up a lot of the game mode systems and lay the foundation for future ideas. We’re really looking forward to crafting more interesting and varied game modes with layered goals for both VR and non-VR players. We have a lot of ideas for tasks we can introduce instead of just “hide from the gorilla” or “kill the gorilla”.

In our last update, we introduced the “Advanced Shaders” toggle for our new shader stack. We’ve done a lot of behind the scene work to tie various effects to the time of day behavior. Now we have really cool looking scenes at different times of day. We’re limited in what we can accomplish visually until we have a proper 3D artist on board but playing with shaders is something we enjoy. We hope you like the new and improved look. No screenshots for now, just go enjoy it in-game.