November is over, which means Christmas is right around the corner. Before we head into the holiday season, we wanted to get out one more Update for Late For Work. This one focuses on fixing a whole bunch of issues that many players have brought to our attention. We are always very glad for your Feedback!

Late For Work will now work with almost any controller. We tackled this bug after this review from one of our players. We improved the way the game recognizes USB controllers and it should work for pretty much every controller out there. Some may have to be mapped correctly with Steam Big Picture before use however, please check out this guide.

Also we noticed that we (inadvertently) disabled inputs when the game’s window was not in focus. This means if you clicked away (perhaps on a dual screen while streaming) or a random windows pop-up appeared then you could lose controller input. This should also be fixed now!

If you still experience controller issues, please let us know on the forums or in Discord.

Remember when we said that almost everything is new in the last big art update? Well now actually everything is new! Almost. We worked some more on the last few models that survived our art overhaul. This includes mainly the Cows (now properly distinguishable as bulls and cows), but also some other tweaks like improving the tanks (again).

When we replaced the car models in last release, we didn’t really pay attention to scale. Well, only insofar as the cars to the humans. For the cars to be big enough for the humans, they ended up being as big as the tanks. Long debates ensued on whether we should address this. Tweaking the scale of the tanks affects everything: controls, projectile strength, ease of cover, AI behavior.

But we couldn’t stand the idea of tiny tanks, so we scaled them up and fixed up all the ensuing consequences. 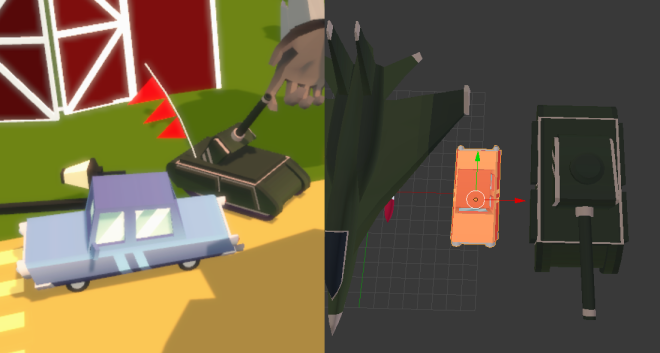 This one has been on our todo list for a while and we are happy to have finally finished it. In-game UI should do a much better job of showing what is going on, current health, current score and so on. The Gorilla’s health and flat players’ lives are now clearly displayed at the top of the screen for the flat players, while the billboards show the same info for all players.

Also we’ve tweaked quite a bit the other “help” messages that appear to be less annoying and more context relevant. Specifically, the “reset camera with Z” message should appear less often. We also added some visual clarity to the “motivating” feature in the bull run mode to make it easier for players to understand its effect. Thank you for all the feedback on this one.

This is something we wanted to integrate ever since we saw the first SnuggleTruck videos last year. We actually prototyped something 7-8 months ago but never wrapped it up because of the thousand other things to fix and improve. But, for this release, we wanted to include our first twitch chat experiment. This is as a small thank you to one of our nicest players, Mr. Pontus, who’s given us endless feedback (we know this is not “online support”, but let’s consider a first small step in that direction).

We’re not sure how many players want such a feature, but if this interests you, check it out. It’s still pretty basic, but play around a little bit and give us some feedback where you’d like to see us take it. You can chat with us on our Discord!

Of course there is much more than that. Many bugs have been fixed with this update as well. The full list of changes is below.