it’s time for another GrowRillious Update, just in time for the spookiest season of the year. We’ve added tons of new scary content to the game, so grab your silver arrows and garlic cloves and let’s jump into it.

New, supernatural inhabitants have invaded the GrowRilla islands and are hunting for fresh gorilla snacks. All new Halloween content and special areas will appear with high frequency during the next week or so and then less regularly afterwards.

We are not going to reveal too much, just leave you with a few teaser images and we’ll let you explore all the little surprises.

A haunted mansion, guarded by the undead.

A graveyard, full of potential food and enemies.

As per usual, this update is packed with new improvements and fixes for the game. We’ve tackled some previously requested bugs, such as being able to clip into the ground after getting too close to the water.

We’ve improved the map layout algorithm to prevent the oh too common problem where areas would spawn too close to the water. This has been an on-going effort but now you definitely shouldn’t encounter any more floating tanks.

Another highly requested feature was a spawning area. Enemies would frequently attack you as soon as you spawned into the world, which was pretty unfair. We’ve added 3 different spawning areas for you to spawn in, which will prevent enemies from spotting you right away.

We’ve also generally improved the AI behaviors. NPCs can now become so scared that they run away. This is indicated by a small shield icon above their head (we’re working on a better represenation of “fright” but it’s a bit challenging). Usually NPCs will run away if you approach them when at a big size, or if they sustain enough damage. You can try it out with the general too. 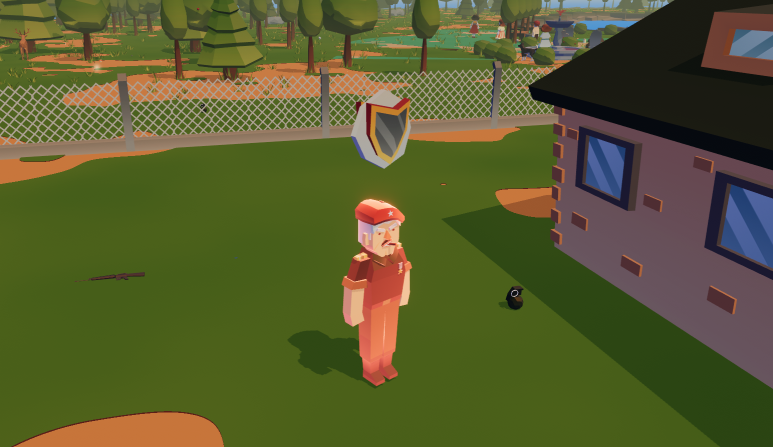 In our previous update, we teased a screenshot of our improved water edge and cliff visuals. We’re continuing work on building more diverse environments and adding more verticalities to the game. These are still in the prototype stage, but we’re now starting to build plateaus and mountains. Let’s see how these work out.

Our aim is to add more uses of the vertical dimension of the game. You’re a gorilla after all! You should be able to climb everywhere (and have a reason to). We hope that this will create new opportunities for exploration and content.

We’re also continuing to work on a more coherent campaign mode for the game. This one will take a while to put together properly but we hope to share some progress with our next major update.